Everything about solar inverters and their types

Why do we need an inverter?

The basic function of an inverter is to convert direct current (DC) to alternating current (AC). Direct current is generally produced by batteries, photovoltaic (PV) cells, fuel cells, etc. Large scale production of electricity takes place in the form of alternating current everywhere as the transmission cost for direct current is very high. For this reason, all the devices that we use in our daily lives operate on an alternating electric supply. Thus, an inverter is needed to convert DC into AC so that it can be used to operate appliances and electronics. SMU is a device that can be used to convert a regular inverter into a solar inverter. It has a switch that can be used to choose between the two modes except during the night when it acts as a regular inverter only after stored battery energy has been consumed. An SMU has a charge controller and it also prioritizes solar power over grid power to boost savings. SMU also optimizes charging cycles to improve battery health and performance. In a microinverter system, individual panels are attached with a microinverter that converts the electricity generated by the panel into AC before sending it for use. Microinverters have a higher upfront cost but their benefits easily make up for that. In the case of partial shading of solar panels in a solar array, microinverters ensure that the output of unshaded panels does not get affected. This is made possible because every panel has its own micro-inverter as opposed to a string system in which the power output of individual panels is determined by the panel with the least power generation. Thus, microinverters should be the first choice at places where there are chances of partial shading or panels have different tilt angles or face different directions.

Besides these, there are off-grid, on-grid, and hybrid inverters depending on the connectivity type of solar inverter with the main electricity grid. Let’s discuss them in detail. Also called grid-tied solar inverters, on-grid solar inverters convert DC generated by solar panels to AC and send back the excess power generated to the main grid through a net-metered connection. There is no battery in an on-grid inverter system and it is directly connected to the solar panels and the main grid. On-grid inverters step up the voltage of the current using an inbuilt transformer so that it matches the voltage of the supply line.

It also immediately disconnects from the grid in case the main grid goes down or if there is a blackout to ensure that no worker on the mainline suffers an electric shock. Additionally, users can install a zero-export device that can be used to regulate the amount of solar electricity being sent to the main grid, or even cut-off the export to the grid completely. 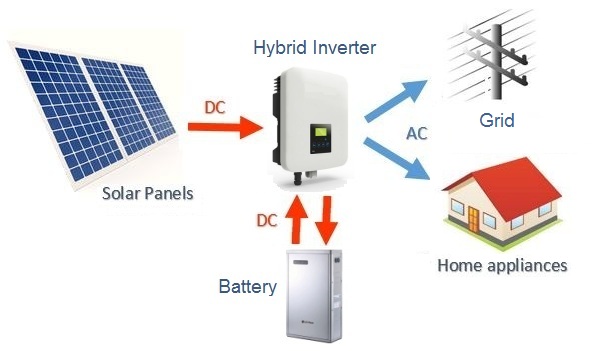