Solar 101 - Everything You Need To Know About Solar Energy Do you often wonder if installing a rooftop solar module would be beneficial or not? Do you feel that you don’t understand the technology well enough to bring it to your home? If you keep up with the latest global developments, then you must have surely come across the increasing tendency of individuals, governments, and MNCs alike to be labeled eco-friendly and green. We are pretty sure these must have aroused a multitude of questions in your mind about the nitty-gritty aspects of Solar Energy. Through this post, we will attempt to make you familiar with all the basic ideas, questions, and concepts related to Solar Energy.

Click here to get a pdf of this article and read it at your own pace. Why is Solar getting Popular?

One characteristic trademark of the 21st century has been the emergence of an unprecedented environmental consciousness among the masses. At the heart of the campaign against climate change and global warming, lies the exponential growth in the use of renewable energy often termed green energy. As conventional sources of power keep getting more polluting and expensive, people all across the globe are moving towards alternate and unconventional sources of energy. When it comes to renewable energy, Solar Power, shines as one of the brightest stars in this arena, very similar to the Sun, that illuminates the darkness of the solar system, and is the source of all life and solar energy on Earth.

The Sun has been there for more than 4 billion years, but it wasn’t before 1839 that humans actually discovered the treasure of electric power it hides within itself. All the fancy solar panels and solar-powered devices we come across exist today thanks to AE Becquerel - the French physicist who discovered the Photovoltaic (PV) effect in 1839. In simple words, Solar Energy is produced by converting the incident sunlight on Earth’s surface into either electricity or heat energy depending on the application. The conversion of sunlight into heat is called Thermal Solar and its transformation into electricity is called Electric Solar. The transformation of incident sunlight into electricity is a multi-step process and involves the use of solar cells, solar panels, solar inverters, and batteries among other things. We have written a blog to help you understand the working of solar energy in 6 simple steps. Understanding it is just a click away.

Why You Should Choose Solar Power - The Benefits:

As Shakespeare said 4 centuries ago in Julius Caesar, “The fault, dear Brutus, is not in our stars, but in ourselves”, so is the case today when it comes to renewable energy. The Sun, the closest star to us, sends plenty of energy to our planet, every day. In fact, every hour of sunshine is enough to meet the human requirements of energy for a year. But, it is our fault, that we haven’t realized and utilized this immense potential. However, the positive side to it is that the recent push for clean energy has helped Solar Power record unprecedented growth rates across the world. It is not a coincidence that everyone is suddenly attracted to Solar Energy. There are plenty of Benefits of Solar Energy, some of which are:

These are just some of the benefits. Solar energy has many more feathers in the hat when it comes to the advantages and benefits. Find the goodness list here. 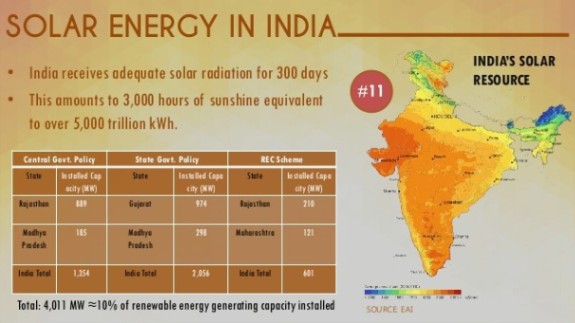 The Sun shines brightly on the Indian soil, giving it life and fertility. The sun also finds prominence in the culture, folklore, and mythology of this vast nation. The advent of solar panels has added a new dimension to the age-old relationship between the Sun and India. Each year, with over 300 sunny days, India receives solar energy equivalent to five trillion kilowatt-hours on its landmass.

The question here is not of an ‘if’ but a ‘when’ or ‘how’. The way solar energy has percolated to every stratum is concrete proof that the future is going to be sunny when it comes to energy.

The cost of solar electricity has fallen by 85% from Rs 17/unit in 2010 to just Rs 2.44/unit thanks to innovation in technology and schemes introduced by the Indian government. This makes India the cheapest country when it comes to the cost of solar energy.

India stands out in the world when it comes to solar energy.  Three encouraging facts about the Indian Solar Landscape are:

A major part of this transformation has been ushered in by the judicious policy-making of successive governments at the central and state levels. Most of the Indian states have specific solar policies to promote people to adopt solar energy. Additionally, a lot of Indian states allow net metering, through which users can sell the excess solar electricity generated to the DISCOMS (Distribution Companies) at the retail market price of electricity. The subsidies provided by the governments on the cost of solar panels and solar devices have helped Indians overcome the psychological barrier of large upfront costs of buying solar equipment.

How Indians Are Using Solar Power?

In the past few years, Indians have adopted solar power in its myriad forms including solar water heaters, street lights, and rooftop solar modules to power their businesses and households. It is not just the availability of sunny days that makes solar power suitable for India, but also the diversity of applications possible for a country as diverse as it. It no longer matters if a person doesn’t come from a privileged class as solar energy has become more than affordable and comes in small affordable modules and devices.

Rooftop Solar: Everything You Need To Know As the name suggests, rooftop solar refers to the solar modules installed on roof-tops or terraces of homes and commercial spaces. These modules convert the rays of the sun into useful electricity that can power homes, offices, and even industries. Often, the center stage is occupied by stylish solar panels, but there is more that goes behind the scenes in a rooftop solar module. There are other types of equipment like solar mounts, solar batteries, and solar inverters that play their part in lighting your room and heating water for you.

Rooftop Solar: Area And Other Requirements

People often imagine that solar panels can only be installed on massive factory roofs or large spaces. However, solar modules worth 1 KW power can be set up in as little as 100 sq. ft. Additionally, the user can meet a part of their demand from solar power and take the remaining from the electricity grid.

Rooftop solar can also be installed in apartments and the electricity generated can be used to power common amenities like elevators, parking lights, etc. Since residents have to pay for these bills, going solar will be a source of collective savings for everyone living in the building.

Although there are several solar panels available in the market and many more are coming up, there are three prominent solar panel types that people usually opt for in India - Monocrystalline, Polycrystalline, and Thin-Film Solar Panels. The panel type best for you depends upon the area available for installation and the budget you have allocated for the solar installation. Monocrystalline is the most efficient and thin-film panels are the cheapest among the three. Find the best panel type for you here.

In net metering, the user only pays for the net electricity he/she consumed. This ensures that users can even earn revenue if electricity production from solar panels is more than consumption.

In gross metering, the user can sell the electricity generated by their solar panels to the regional electricity board at the rate decided by the State concerned.

Which metering is better for you? Find the answer here.

The Future of Solar Power Constant scientific endeavor in the renewable energy sector has done wonders for making solar power more affordable and incredibly efficient. Technologies like light-sensitive nanoparticles and multi-junction diodes are set to improve the efficiency of existing solar cells up to 45%. As fossil fuels become more expensive and people become more environmentally conscious, more and more people will opt for clean and cheap solar power.

Some cool futuristic innovations in solar energy technology are :

This was just a glimpse of the future. Click here for a more vivid picture of what lies ahead on the road to the future for solar power.